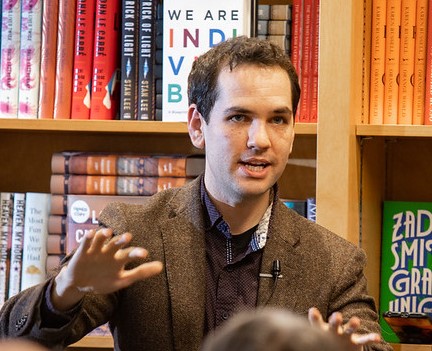 Ezra Levin is the co-founder and co-executive director of Indivisible. Prior to founding Indivisible, Ezra served as Associate Director of Federal Policy for Prosperity Now, a national anti-poverty nonprofit. Previously, he was the Deputy Policy Director for Congressman Lloyd Doggett (D-TX), Field Director for Doggett’s 2010 reelection campaign, and an AmeriCorps VISTA in the Homeless Services Division of the San Jose Housing Department.

Along with his co-founder and spouse Leah Greenberg, Ezra has been featured as one of TIME 100’s Most Influential People of 2019, included on GQ’s 50 Most Powerful People in Trump’s Washington, and ranked #2 on the Politico 50 list of top thinkers, doers and visionaries transforming American politics. He has appeared as a commentator on and/or been interviewed by MSNBC, CNN, NPR, Pod Save America, the New York Times, the Washington Post, Politico, TIME Magazine, the New Yorker, the Nation, Slate, and Rolling Stone, among others. He is the co-author of We Are Indivisible: A Blueprint for Democracy After Trump, published by Simon & Schuster’s One Signal Publishers in 2019.

He holds a Bachelor of Arts from Carleton College and a Master in Public Affairs from the Princeton School of Public and International Affairs.