During her three terms in office, Rep. Pramila Jayapla has been laser focused on creating real, transformative change in our country. In her short tenure, she has become one of the most effective progressive leaders on Capitol Hill, using her power to lead the Congressional Progressive Caucus to take bold action. Throughout the fight to pass an inclusive recovery, she has refused to leave working families behind, fighting for greater investments in child care, housing, health care, education, and more. She’s been a champion of Medicare for All, the Green New Deal, raising the minimum wage, getting money out of politics, debt-free college, taxing the rich, fixing our broken immigration system, and safeguarding reproductive freedom.

Rep. Jayapal’s constituents know that she’s someone who not only understands the issues they are dealing with, but someone who will work tirelessly to fix them. She’s delivered for her district, and we’re ready to deliver for her. We’re proud to again endorse Rep. Jayapal to continue building progressive power in Congress. 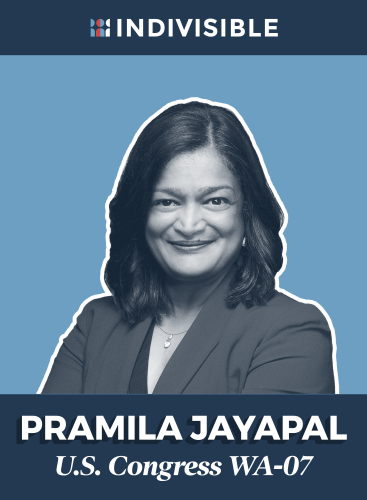