Odessa was born and raised on the East Side of Nashville and has a long track record of advocating for her community. She spent 14 years as a public servant in Nashville’s Parks Department, including the Napier community center, where she saw first-hand the effects of political neglect and policy failure: poverty, substance abuse, and gun violence. She’s co-founder and Executive Director of Stand Up Nashville, a coalition of community groups and labor that fights for working class families as Nashville rapidly changes. Through SUN, Odessa has worked to rein in corporate tax breaks and giveaways and helped guarantee that Nashville’s new MLS stadium comes with community benefits like affordable housing, living wages, and workforce development.

As the first Black woman elected to Congress from Tennessee, Odessa will be ready to take on the big structural issues that limit opportunities for working families. She’ll fight for bold policies that deliver for those who need it most, like Medicare for All, a Green New Deal, and investments to guarantee housing for all. We’re proud to endorse Odessa to usher in a new era for Nashville.

Indivisible Nashville nominated Odessa Kelly for a national endorsement. If you would like to join the group or get involved, you can find them on their website. 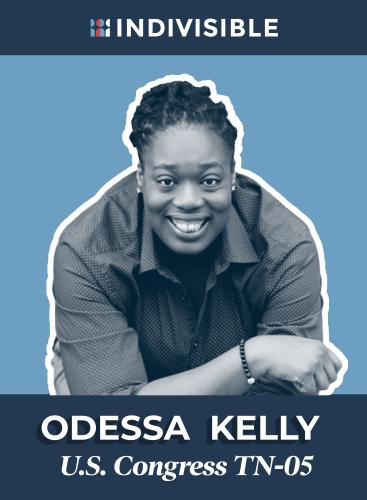