From community organizer to City Council member to congressional candidate, Greg Casar is a champion of progressive policies and a fierce advocate for working families. Greg believes a better world is possible if we fight and organize for it, and we’re ready to help him realize that vision. We’re proud to support Greg in his run to represent Texas’s 35th District because Congress needs a powerful progressive voice like Greg’s.

In his 7 years on the Austin City Council, he successfully fought to establish paid sick leave for Austin workers, pushed the Austin Police Department to clear the city’s decades-long rape kit backlog, secured funding for the largest affordable housing investment in the South, ended the punitive practice of arrests and fines for personal marijuana possession, and much more. He’ll take that same fighting spirit to Congress, where he’ll work to pass Medicare for All, stand up to corporate special interests, protect reproductive freedom, create a path to citizenship for immigrant families, and strengthen protections for our nation’s workers.

Simply put, Greg Casar is an exceptional progressive candidate who can help deliver a better future for our nation, and that’s why he’s the clear choice to represent the people of Texas’s 35th District.

Indivisible Austin nominated Greg Casar for a national endorsement. If you would like to join the group or get involved, you can find them on Facebook or their website. 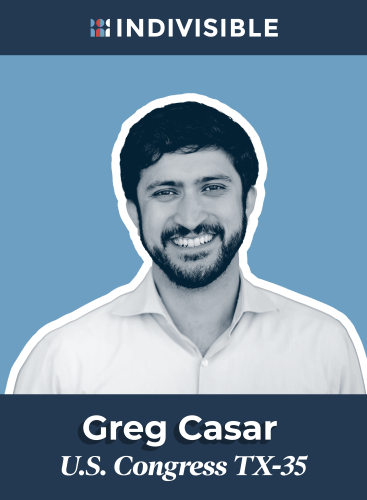